skip to main | skip to sidebar

I'm on a roll here, so here's a belated post about our Christmas with Nana. No, actually, come to think of it, she did a great job of describing it, so I'll just refer you to her blog :)

One thing she only gave passing mention to though (not that I blame her), was that after being sick on Christmas Day and Boxing Day, on Dec. 27 (the day that Nana and I took the two older boys to the Children's Museum), James had a series of short (<1 min.) seizures spaced 2-3 hours apart, beginning shortly after he woke up that morning. After a couple of visits to the Emergency Department through the day, he ended up being admitted to the Children's Hospital that evening for a couple of doses of anti-seizure medications and an MRI under general anesthesia the next morning. 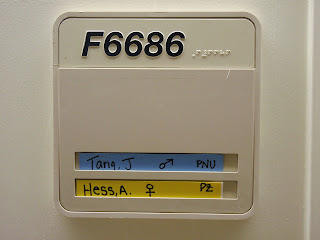 The upside of the story: James got to have an MRI. I mean, how cool is that, to be able to see the inside of your own noggin'? I, for one, have been wanting an MRI for years now, just so I can peek at my grey matter, but somehow I haven't been able to convince the insurance company to pay for one! 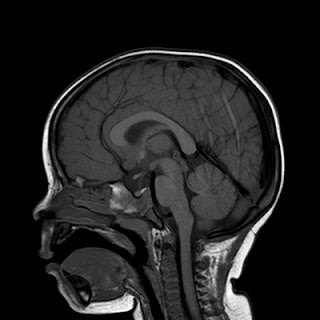 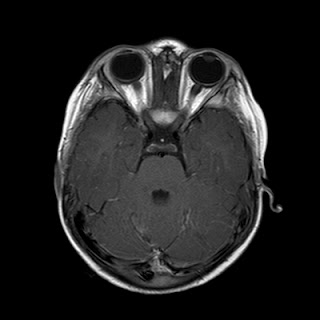 (above) James MRI - coronal slice
The downside: the hospital sucks. I mean, don't get me wrong -- the nurses, clerks, techs, doctors, and residents were great, but James sleeping three times for 30 minutes each over 24 hours made for one LONG daynightday! While we were there, he went from this 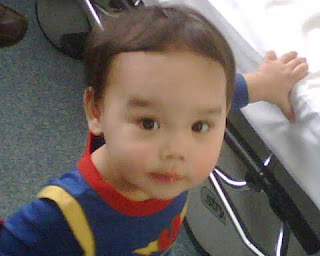 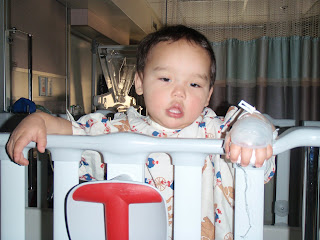 with only a little bit of this 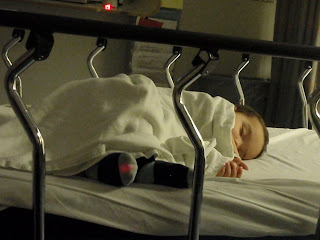 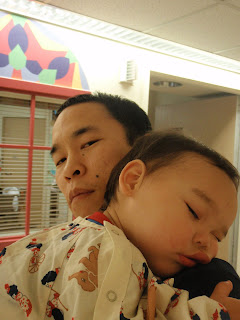 to break things up!

Not that I blame him -- he hated the hospital gown, the glow of the pulse oximeter through his sock, the IV and plastic guard on his hand, the arm board on his wrist, the EKG leads on his chest (he tore those off within the first couple of hours), the nurses taking vitals every four hours, and, to boot, he wasn't allowed to eat or drink anything all night prior to general anesthesia. And once he started getting anti-seizure medications, he hated that no one would let him go free to walk around on his own because he couldn't do it without tripping all over himself (an unfortunate side effect of the medications). In fact, pacing the halls with him all night, he got into a pattern of holding out his hands and crying for every nurse we walked past to take him from me -- and the ones who did soon found out what he was really looking for -- someone to put him down! Upon which I would take him back and he would howl despairingly -- until the next nurse passed by, that is... So yeah, pretty much his whole life sucked at the hospital. 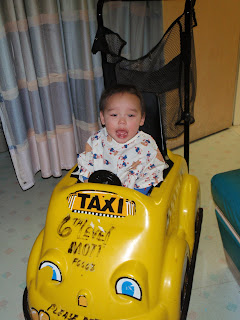 Actually, there was one bright spot to his stay: he was sure glad to be able to eat again once he got back from his MRI, downing two cups of pedialyte and a cup of yogurt immediately afterwards, followed by a cup of milk, a cup of jello, and some cereal about an hour later! 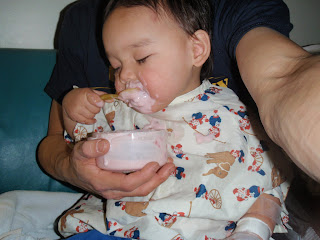 I was glad he had such a good appetite, but he ate so much, I was actually worried he'd throw up and end up having to stay another night -- in which case I'm pretty sure I myself would've had to have been hospitalized in the psych ward for his own protection! But he didn't (and I wasn't) and we got home just in time to crash for the night and get up the next morning ready to drive to Niagara Falls that day (with the doctor's permission, of course)! 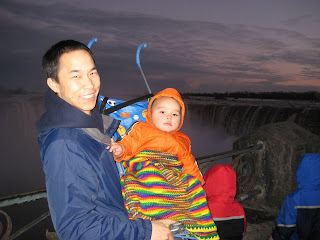 Anyhow, all is well -- he has one more test left this Tuesday, but the doctors didn't see anything suspicious on the MRI and at this point they think it was an isolated incident somehow brought on by his illness. Still, they told us to keep watching him, and gave us a prescription for emergency anti-seizure medications should he have another incident (an incredibly expensive prescription, I might add -- thank goodness for TriCare!). He's back to his normal self now, so I guess so far, so good.

Thanks to all who prayed/fasted for him -- we appreciate your faith on our behalf!
Posted by #15 at 9:37 PM 9 comments: 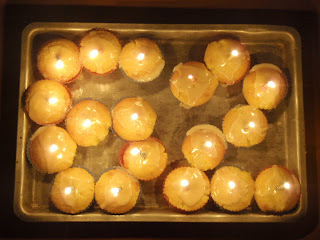 As far as my kids are concerned, any excuse to have sweets is a good one (although there was a little bit of disappointment when they found out I was only making the shape of a 62 and not actually 62 cupcakes...). Never one to miss out on an opportunity, when I mentioned it was too bad mama wasn't here to give presents to, Ethan came up with an ingenious plan: "I know -- maybe we can give presents to ourselves!" No, we won't be doing that, but nice try, bud. Whatever the case, happy birthday and love to you, Mom, from the little Tangs (MI).

Other Interesting Specks in the Blogosphere